1. It’s amazing that he’s allowed to walk around holding his head high for the sake of being a CEO

2. Seo Taiji along with the criminals?

3. Sad to see that he has children of his own, yet the man is still acting as he does kk

4. What a scary guy! He does not seem to be aware of the times we’re living in.

5. Examine him thoroughly. Evidently, he’s acting pompous like this since that he’s secure. I’ll bet there are many connected names to his name.

6. The police have kept things under wraps for YG druggies for years and now they’re pretending to be doing some serious investigation. What do you think of the Seungri case you allowed to go unnoticed? It’s amazing how Korean prosecutor ignore the case whenever they feel it is appropriate and only prosecute in cases where they can gain from it.

7. Our legal system can never be able to catch up with Hyun Suk hh’s law. is a stance of money.

8. The thug is forever the same

9. So Seungri learned his techniques by studying Yang Hyun Suk for a long time.

10. It’s amazing to think that He was once the judge on auditions and was a snarky critic of other contestants using his lips… Sigh… 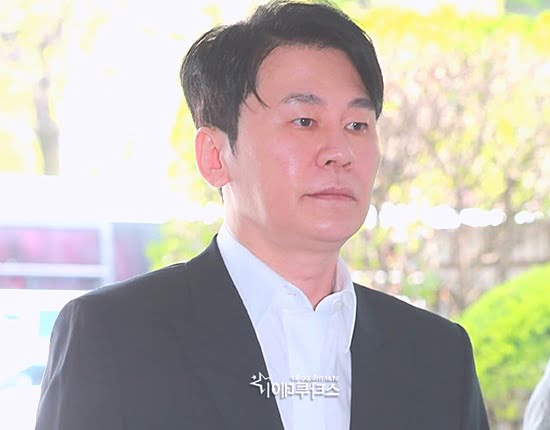 1. See him holding his head high as the man knows he has people he can count on to rescue him… Burning Sun needs to be examined again…

2. What happens when you let a criminal earn money.

3. This world is simple to allow a criminal like him stroll about with his head held high in this way

4. If he didn’t get into Seo Taiji then he could have been a third-rate dance instructor. Put yourself in jail and you’re free to gamble as you please with Seungri following…

5. Remember the time when you were a teenager and the Burning Sun scandal broke out and there were trucks being spotted on the outside at YG with people carrying documents to the public and they were reported in the media? It is imperative that the case be investigated again.

6. Education is crucial… How comparable is it to Park Jin Young

7. A thug from the alleyways never loses his roots

8. The very first person the Korean entertainment industry must remove is him! !

9. Seungri was a child who watched Yang Hyun Suk. The same applies to GD as well as TOP. While when he was snorting them with drugs, he could have been teaching them about character.

10. Yang Hyun-Suk you’ll never be accepted by the society. You’ll be banished.

1. Oh my god! He was in a way that was sexy and without a mask! The pharmacy is tsk

2. He truly embodies what it’s like to be not educated…

5. How sad… This can happen when an ignorant fool becomes wealthy

6. I was watching an YouTube clip of JYP providing Twice character education this morning. This is so similar. The difference between an elite and the Thuggle.

7. He ought to hide the most of himself possible, but why is he so sure of doing… Tsk tosk

8. He’s not even following the law, so why would you think he’d have the sense to put on the disguise… Sigh

9. Oh! The pharmacy’s CEO! Do they not offer masks in the pharmacy?

10. I’m not one who demands any person to put on masks, but the man knows that he’s going in court and not wearing a mask will create problems. So why is he so obstinate about it;;