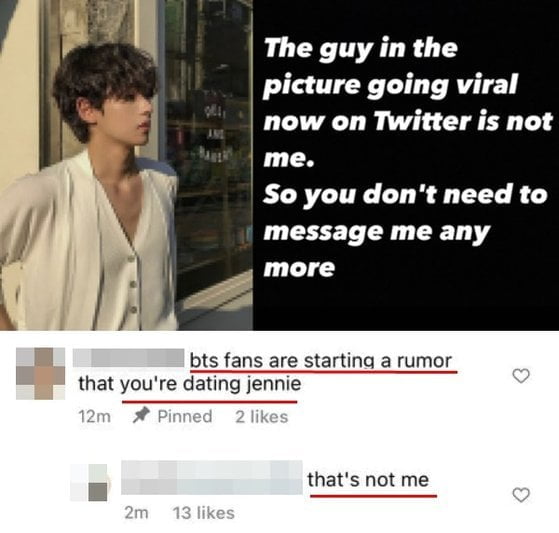 1. I believe that V could be a lot better

2. Jennie is the master of relationship hopping… she can’t do without the company of a man

3. V as well as Jennie are in a 100% relationship. Their names were listed on the flight list.

4. Why do women get accused of dating, but this is “cool” when a guy does it? These remarks are disgusting.

5. It appears that V fans tried to lie to get away from the truth by hitting on a random person The sigh of a sigh is a sigh.

6. I’m not a fan of female idols, but Jennie is a daebak. She has dated the best idols of the top three agencies and will make a grand entrance when she has a relationship with a girl from JYP. The recent romance does seem like she was hopping really fast from her previous one. I’m curious which V was thinking when she got in a relationship with a woman similar to her?

7. Dating’s fine! It’s fine It’s just a matter of time! However, jumping from relationship to relationship at this speed can be a little too fast. Also, posting Lovestagrams will only hurt people’s feelings. followers. It’s thoughtless. You can live your own life, but remember that your followers are entitled to leave them too.

8. Never again rush some innocent person in this manner. Get up. Aren’t you able to remember the time when you slammed a random person with Jungkook and then you’re repeating the same thing? Are you sure V would have remained silent all this time if stories weren’t so?

9. This Jennie is often the subject of scandals. I’m curious about what kind of relationships she’s had which haven’t been reported in the press? K.

10. Both agencies have not in a position to publicly say that they’re dating. Jennie appears to have moved to the V after her previous one, and I’m guessing her fans aren’t willing to acknowledge it since she’s had a number of romances in the past. However, it’s true that the agencies would have immediately denied it even if they were not. They’re keeping quiet since they’re engaged, so maybe fans need to take a hint and not be too quiet.

11. It’s an animal kingdom. simply let them be.

12. V has been involved in more scandals with his partner than Jennie however V hasn’t been caught yet. Jennie’s luck is that she is caught every time. If you search for it, V has way more gossip about her relationship than Jennie.

13. This is embarrassing for GD

14. I can sense a breakup due to the fact that so many people are making an argument about the issue… Tsk. If they really cared about their relationship at the beginning I would think they’d been more cautious about not be caught rather than having their windows smashed as they have. Let them end their promotional activities and end the relationship without causing any harm to the fans by doing this and I guess.

15. It’s clear V as well as Jennie are together… they’d have been denying it by now if they didn’t.