Home » What exactly problem is with journalists nowadays towards to Red Velvet?

What exactly problem is with journalists nowadays towards to Red Velvet? 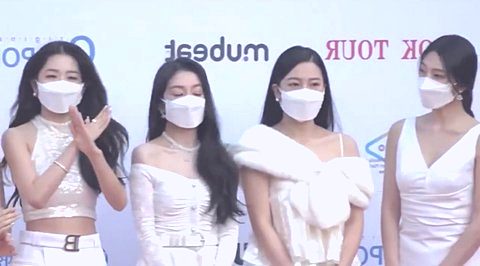 You can find 14K positive Corona cases as well as a rise in cases among celebrities as well.
Nevertheless, they are attempting to anger them by asking them to remove their masks.

They prompted them to remove their masks, therefore Seulgi tried a mask – removing move towards Irene.

Using her hands in a X motion, Irene said no, and Seulgi in addition resisted.

They requested them to remove their masks, as is common with trash reporters.

Seulgi and Wendy were not sure what to do.

Irene said they are not able to.

The members then resisted once again.

I imagine that in case they’d taken it out from the entire point of view, Red Velvet wouldn’t have been in a great mood.

Why are trash journalists asking Red Velvet to get rid of their masks in this economy? Are they in the wrong?

Why do people hate Red Velvet?

1. Being really decisive, Irene did well.

2. You will find proven cases from the latest awards ceremonies and the singers that showed up today were all on alert. Could their request to get rid of the masks be justification?

3. There’s a reason Irene is the leader, regardless of what other individuals say. Her determination inspires me. She was additionally really cool in the gif whereby she was pointing at a cigarette smoker.

4. They’re doing that even to well known individuals such as like Taeyeon or RV so consider how they treated lesser known idols such as that! I’m curious.

5. Irene does not have a solid spirit but breaks instantly. Actually are these trash reporters insane? Hate when it is time to hate.

Irene and Seulgi waved respectfully at their masks, however the journalist continued pressing them to remove their masks. They actually instructed Taeyeon by means of a noisy voice to take hers off, which Taeyeon didn’t understand. These garbage reporters ought to seriously d * e..

1. I am f * cking over the top. They must realize they need to remove their masks or they are going to get hated for it, so they’re making use of this as a means to make them dislike themselves.

2. The manner in which the journalists speak is dissapointing. I’ve only saw the video. If they yelled at Taeyeon they behaved as douchebags.

3. Oh my goodness, in case I were you, I will yell “take yours off” and get myself into a scandal for my individuality.

4. Furthermore, the death point had been they did not mention anything to Im Youngwoong as you might expect from that gender.

5. They referred to as Red Velvet additionally. Just why do they force it upon you? Particularly since things have grown to be extremely dangerous.