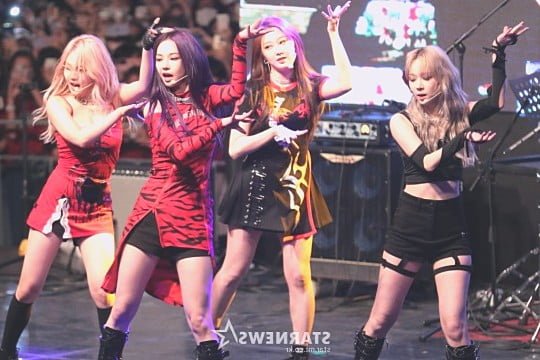 1. That’s why you must be cautious regarding what you say… The Ningning was emotional in the midst of the situation and made up a flimsy statement declaring “Aespa is live singing!” that helped to bury their lip syncing issue in the moment (I remember their fans protecting their faces from the sand at the time) But when YouTubers such as Sojang and other channels that provide information began to expose them with proof of them not even singing live in public, their talent were exposed. This was especially the case when they toured the US too . Ningning had not said that, nobody would have been so concerned and they wouldn’t be being slammed as they do now. It’s hilarious and also unfortunate.

2. Red Velvet was performing at Korea University yesterday and they were live on stage and interacted to the students. The reason that students are snubbed by Aespa is not just due to the lip syncing issue , but also because they displayed a sarcastic attitude towards the crowd, too. Both are under SM however there’s a significant distinction between the two groups. This isn’t just due to the perception that “SM groups don’t perform live. “… Red Velvet even sang live with no the music in Joongang University in the past.

3. I’m an Aespa enthusiast… as well I’m not sure if I’ve ever protected them, however, this is something I could never imagine being able to imagine. If they’re truly talented why not make behind-the-scenes recordings similar to what Red Velvet and NCT do? If you look at their encore shows they’re not as bad So why don‘t they sing live? Or are they refusing? Personally, I think Winter’s quite decent. Karina’s average. It’s not as stable as you listen to her encores and her raps aren’t exactly like her previous recordings… However, I do hope that they incorporate this information for their next promos and go in a positive way.

4. I attended the Hanyang University performance and was very disappointed by the obviousness of their lip-syncing was.. They sang only four songs, and then left. Jannabi on stage in the past, and they even performed an encore prior to going off. Aespa was gone as fast when they were done.

5. We need more students who think like this to ensure that businesses don’t believe they’re able to just scam people and then get off with it. It’s sad that people continue to be willing to accept this kind of behavior with no any reason.

6. Aespa is destroying their image each time they appear on the stage. I’ve never seen a team that big as Aespa simply continue to slide downhill as this.

7. Wow, they’re just dancing to a couple of songs however they’re receiving more money than salarymen earn for a year. I’m in awe. I’ve always been intrigued by Aespa and have been watching their performances since their beginning because I believed they were a great group with great songs. could make them a great group if they were able to do it live. It’s a bit annoying that they’ve never performed live, and yet , their fans are applauding their fans in the comments for their live performances..

8. Aespa has not once since their inception shown their skills to the fullest extent, and yet they have been treated with respect that isn’t worthy of. From this point on, I’m looking forward to seeing groups that have real talent to be in the spotlight. I’m hoping NMIXX and StayC will come back with quality songs and get lots of appreciation.

9. It started with Coachella then the college music festival… Do they not grasp the significance of a “festival”? It’s more than just a stage that’s been dressed up You have to perform on stage and engage with the crowd. Do some adlibs, demonstrate the proper manners onstage… this is the essence of a genuine musician.

10. They’re the next level in that they’re deemed “talented” even though they’ve never even performed live!

11. The group was designed specifically for lockdown ages

12. Aespa isn’t the only one that lip syncs . They shouldn’t be slammed for it. The issue, however, is that they’re telling people that they’re singing live , so that their fans make them feel good about it, and make them appear superior to everyone else, particularly with the SM media performance while they were at Coachella… It was hilarious to me to see how they appeared confident and self-confident, while encouraging their fans to not be sceptical about the feedback on their Bubble

13. IVE was seen lip-syncing in Kyemyung University but it was discovered that at the very the very least Ahn Yoojin had been singing live, as she lost her microphone during the song ‘Royal’, and her voice was cracked. IVE should be grateful for Ahn Yoojin… since, if they didn’t have her, they’d be lip-syncing their tracks and receiving the same amount of adversity like Aespa is.

14. I’ve never actually seen them perform live other the encores of their music shows

15. It’s funny to me that a musician is able to claim the title “first live singing’ kk

16. I was at the festival and was devastated, completely dissatisfied.. The AR was so evident in reality. In a large crowd, so I couldn’t even be able to see anything, and with the music playing it sounded like someone had turned to one Aespa music in the crowd. It was even more disturbing that the Korea University students who got on stage to sing were live on stage and how could they not be embarrassed by this?

17. This is so wrong. How could you earn money and not sing? It must be very upsetting for the children.

18. They’re only performing for one hour and get being paid 50million won. what a rip-off to sing in a live setting Was this show really valuable enough to warrant 50 million dollars?

19. Other groups from SM perform live, and why is it that Aespa lipsync..?

20. I’m wondering whether SM is being too sweet with them… I’m thinking it’s the very first time SM has been involved in an issue that has been so big and it’s something they need to fix.