“BTS Army is the greatest powerhouse of Las Vegas.” 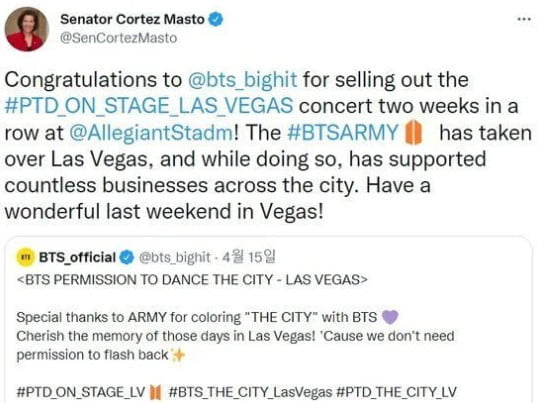 1. Let’s create it as the festival that we have in Seoul! We can make lots of money

2. As expected, Kingtan. Let’s make a lot of foreign currency

3. Let’s now save the Korean economy a bit. Let’s stage concerts in Korea

4. I have seen a lot posts that claimed BTS did not earn money to benefit themselves However, they are now instructing BTS to stage concerts in Korea to boost the economy of Korea.

5. I am hoping that BTS will be able to expand its overseas projects and generate more

6. I’m hoping BTS will have a celebration in Korea too.

7. In Korea the grass in the soccer field has more significance than development of the local economy

8. BTS is an Korean group, however I’m of the opinion that Korea has the worst treatment of them.