Seolhyun: “Living is hard. I’m about to die.”

(The text she posted)

It’s especially important to note that living is a difficult thing to do, and, therefore, even if there is something that hurts, it will not be classified as especially painful. Even though it’s painful, it’s not unpleasant. It is empty, by nature, and therefore there is nothing worth striving for in this world. The world is filled with things that are meant to be beneficial.

It’s probably a positive thing. It’s important to supply the world with such items to ensure that we can endure, Aeja says.

She claims it is a world filled with resentment, which is why living in a world like that is painful. Everyone believes that they’re experiencing this kind of suffering on their own. There’s nothing meaningful about the world of mortals, mortals, and mortals. There’s no need to even try, as it will only make the pain worse.

Apart from that, I’m dying slowly and fooling myself into believing that I’m enjoying things that aren’t satisfying or meaningful. 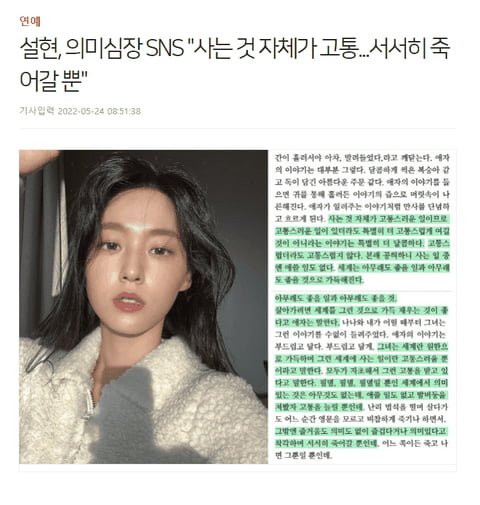 1. The fact that hate commentators continue to be hateful without realizing any of it, regardless of how many times they repeat themselves, is so disgusting.

2. To be truthful, when there was a Kwon Mina controversy began to unfold, Seolhyun received way too many haters. At the time, there were at most 5-6 hate-filled posts about Seolhyun in the talks that were featured per day, just in the forums on Pann alone. There were more than 1,000 votes. From elementary school children to mothers with kids, everyone was posting hate remarks on their Insta. Seolhyun clearly had a tough time.

3. Sigh. It breaks my heart to realize how hard a time that celebrities face due to hateful comments. I also have a tough time when I post articles on PANDORA and there are negative comments, so celebrities must be finding it more difficult.

4. Seolhyun-ah, run away. Cowards are more beneficial than dying. The worst thing you can do is take your life away. Let everything go and live your life so that it doesn’t break your heart. I don’t want to read another article about celebrities who killed themselves because of hateful comments. Don’t go to the grave, and I wish you could just walk away.

5. Then it was discovered that she was not at all a bully. They were second T-ARA…