Home » Netizen blogs are discussing Suga’s lyrics in the song ‘What Do You Think?’ about BTS’s military service

Netizen blogs are discussing Suga’s lyrics in the song ‘What Do You Think?’ about BTS’s military service

We’ll make sure we join Military when it’s the right time, so shut up.

“What do you think about? The lyrics of Suga’s mixtape “D-2,” which was which was released in 2020 are receiving interest two years later due to ongoing discussions about BTS’s military service choice

Woo-woo! We’ll be sure to join the military when the time comes and all the scumbags who attempted to use our name in order to get freeloads off of us, shut up. 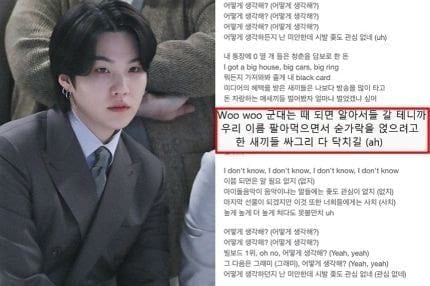 1. Take a look at these lyrics.. If you’re not eligible for military service, and do not enlist in the military, you’ll appear ridiculous and be mocked throughout your life.

2. What would the lyrics be in the event that they were exempted from military service?

3. Wow There are a lot of comments that could be brought to court here.

4. Like you would expect as expected BTS Suga. Suga expressed his thoughts in the lyrics as if.. They stated that they’ll join Military, and not talk about this

5. If Suga does not join the army in the process, he’ll be required to make an apology

6. Please be bold as the lyrics. Don’t get behind the business

7. Doesn’t this song refer to the government meeting with the three largest firms, with the exception of Big Hit in order to talk about the possibility of a break for military personnel? I believe I saw it some time ago.

8. Let them be… Your guys have crossed the line.

10. They also said that they’d give it to this company.. But what’s more bizarre is the fact that ARMYs always share the lyrics every time someone mentions BTS’s military service.