“Woo Woo, we’ll go to the military when it’s time, so shut up, bastards.” 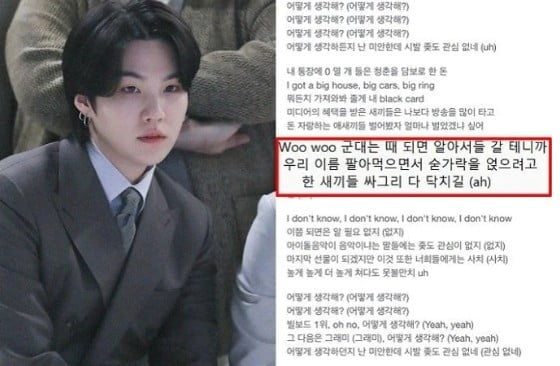 1. I’m not a fan, but BTS constantly claims to be joining the army, so stop criticizing them.

2. I heard that BTS would make the choice based on the agency’s perspective, but I thought HYBE wanted them to be excused from military service.

3. When I first viewed the lyrics, I was startled that he composed them in this manner.

5. Wow, after reading the responses here, I can see why Suga penned the lyrics in that manner.

7. However, isn’t he exempt from military duty due to shoulder surgery?

8. At the very least, this individual will enroll.

9. It would be preferable if he did not compose such songs and instead joined the army.